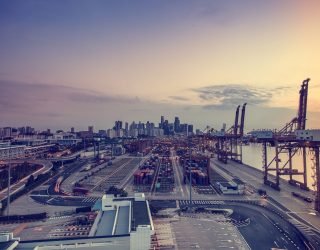 Looking at the history of freight transport, rivers and waterways used to see most of the action. But then, water was replaced by road and rail, and things haven’t changed much since then.

However, I read an article the other day suggesting that the freight industry needs to go back to its roots and make more use of rivers. Err, come again?

The argument is that with so much congestion and pollution on the roads, our cities’ waterways are looking like huge empty resources and should be seen as viable alternatives to roads.

The article was summarising the opinion of Robert Garbett, chief executive of Drone Major Group. I think we can all see where this is going…

He argues that with distribution centres located outside cities, cargoes could be floated along rivers towards city centres and then local deliveries made by – you’ve guessed it – drones (aka driverless vehicles).

Garbett highlights the challenge of integrating driverless vehicles with manned vehicles, pedestrians and cyclists on public roads. But that doesn’t mean they’re not going to give it a shot anyway.

I remain sceptical, but with traffic a major problem, alternatives to inner-city road haulage are definitely overdue.