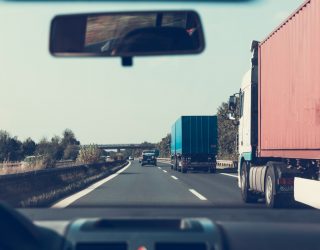 There are many rules when it comes to driving a truck. Some of those include staying focused, getting enough sleep, signalling early and never, ever tailgating.

Every truck driver worth his or her salt knows that tailgating is bad practice. But while keeping your distance from the vehicle ahead sounds easy enough, it can be more difficult than you’d expect.

Here are five things every trucker should know about tailgating.

1 You’re not tailgating, but are you still too close to the vehicle ahead?
There will be times when there is a sizeable distance between you and the vehicle ahead, but it’s always worth double-checking that distance is far enough. For many, the general rule of thumb is to leave a full trailer length of stopping distance for every 15 km/h. However, this should be treated as a minimum distance – bad weather, the condition of your tyres and the efficiency of your brakes will have an impact on those distances.

2 Think twice about travelling in a convoy pattern
You know you shouldn’t, but it can be tempting to travel in convoy behind other trucks. All it takes is for one of the drivers to make a poor judgement or having to brake suddenly and an accident is almost inevitable. Take care!

3 Keep a consistent speed on hills
Something else that’s tempting when you’re behind the wheel of a truck is speeding up as you travel downhill. In theory, this helps build up enough momentum to make up for the loss of speed going up the next hill, but the reality can be dangerous. If this sounds like a familiar habit, be aware that depending what the traffic is doing at the top or bottom of the hill, you might find yourself tailgating.

4 Be aware of conditions
There are a number of factors that impact how you drive. Speed, weather and the amount of traffic all need to be taken into consideration when gauging safe travel distances. Be aware that other vehicles often travel above the legal speed limit, and the more congested a road, the higher the risk of a pile-up. Equally, wet roads, fog or snow mean all vehicles need much more room to slow down. The combination of poor visibility and tailgating is definitely one to avoid.

5 Be aware of other road users
You might go out of your way to avoid tailgating, but the same cannot be said for those around you. Known as drafting, some drivers will deliberately tailgate a truck in order to reduce the drag on their car and, as a result, reduce fuel consumption too. This can be extremely dangerous – not least because it’s hard for truck drivers to see it happening – so be mindful of vehicles behind you.

More than likely, you’ll be driving safely, at the right speed limit and doing your best to avoid tailgating. Fingers crossed, other road users will follow suit.