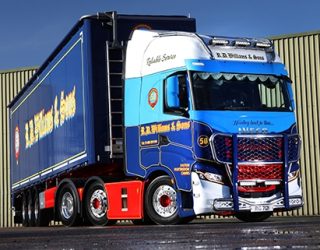 Williams Transport has taken delivery of its fifth Iveco S-Way and it is a special creation to mark the haulier’s golden anniversary.

With 50 trucks on the fleet, almost 20% of which hail from the Italian brand, the latest S-Way is laying claim with plans for more.

This latest S-Way joins as a celebratory flagship with the family-owned company which was founded in 1971 and is celebrating success with 50 years in the haulage business.

While the majority of its fleet features a two-tone ivory and green livery, this vehicle harks back to the original colour scheme used when the current managing director, Andy Williams’ grandfather started the business.

‘I really like the look of the new Iveco S-Way’

“We’ve had good prior experience with the running gear in various Stralis before, and the new cab has made such a difference.

“Even on short runs, the Cursor 13 returns great economy.”

He added: “We’ve got a great 25+ year-long relationship with Guest Truck & Van, so after looking through designs in our original livery together and finding decent availability, we decided it’d look great and went ahead with it!”

The 570-horsepower AS440S57TX/FP 6×2 left the factory in white but has since been treated to an extensive repaint by MA Harding in Rushden, to a two-tone blue with white and red accents.

The chassis, wheel hubs, door mirrors, front grille and external sun visor have all been colour-coded to match.

Not content with this, Williams has had yellow outlining and signwriting in an old English typeface hand-painted at Finch Signs in Raunds, as per the striking original design.

The vehicle has also been heavily accessorised with a three-in-one combination perimeter lighting kit, PTO and bespoke side skirts from Bailey and a twin vertical exhaust stack by Truck Max, both in Wisbech.

Matching trailer has been commissioned

A matching trailer has also been commissioned, a Knapen Exside which enables the driver to flick between work on both sides of the Williams Transport business without having to waste time returning to base for a trailer swap.

The retractable-roof walking floor trailer also features opening side doors for taking forklift-loaded general cargo for one job and top-loaded recycling for ejection through the rear for the next.

RD Williams tends to take high-spec trucks as a rule, and this is no exception.