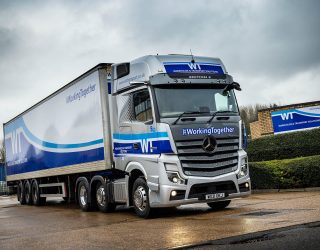 Over the last four years, the firm has introduced three, highly exclusive Actros models and they have just completed the set by taking delivery of an Edition 2 tractor unit from trusted supplier, City West Commercials.

The truck was used previously by the dealer as a demonstrator with a little over 6,000 miles on the clock.

Just 400 Edition 2s were produced and of these, only a handful have reached the UK.

New flagship is a 2553 variant

The truck is finished in Brilliant Silver metallic paintwork and easily recognisable as one of the most exclusive on the road, thanks to its Moonstone Grey grille and sun visor – which incorporates four additional LED headlights – above which is a deep black panel with EDITION 2 lettering.

It has lined-up alongside the two other, limited edition Actros GigaSpace tractor units that the firm acquired last year.

One is an Actros Edition 1 with high-tech Silver metallic paintwork, the other an Actros1 in Obsidian black metallic.

Runs a fleet of more than 60 trucks

WT Warehouse & Transport Solutions runs a fleet of more than 60 trucks – with the exception of four rigid vehicles, every one of them is a Mercedes or FUSO Canter.

The three limited-edition tractor units are the first to wear the operator’s new name and ‘Working Together’ strapline.

Having traded as WT Transport since it was established by Warren Tattersall in 1997, the company recently adopted new, more dynamic branding that better reflects the range of services it offers.

Mr Tattersall, who runs the family business with his wife and co-director Sarah, is looking forward to delivery early in the New Year of four new Actros 18-tonners, a 12-tonne Atego and a 7.5-tonne FUSO Canter, all with curtainside bodies.

He will also purchase another City West Commercials demonstrator – an Actros 2548 with BigSpace cab, when its replacement arrives in January.

“With decent stock in such high demand, though, that’s proving more difficult at the moment.”

He added: “Business is buoyant and the fleet is growing, but we’re also having to contend with the driver shortage.

“As well as increasing our pay rates by 20% in order to retain good drivers and attract new ones, we’ve also focused on working conditions.

“That’s where the limited-edition Actros come in. Of course, the new technology in which we’ve been investing does translate into less downtime and better fuel efficiency. Just as importantly, though, I’ll do whatever I can to keep our best drivers happy.”